Located in San Marcos TX, roughly 35 miles between Austin and San Antonio, The Corridor Council consists of two staff members and a 20-plus member Board of Directors. 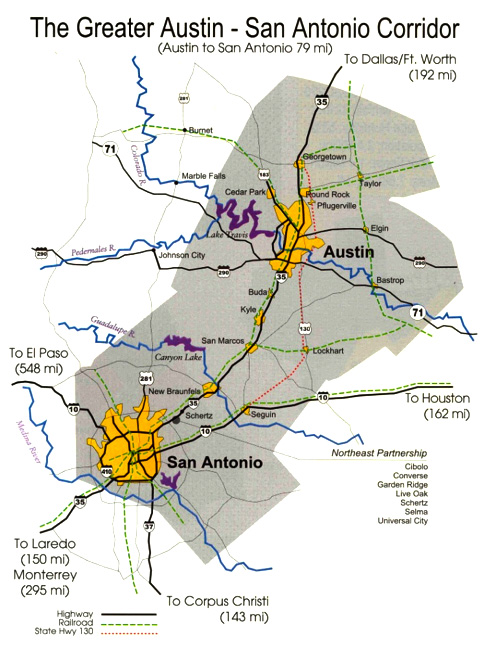 The Austin-San Antonio Corridor is one of the fastest-growing regions in the United States, currently home to 4.5 million people and expected to grow to 6-7 million people by 2030.

Historically, each 1% of regional population increase translates into 3-4% increase in traffic on Interstate 35. Because of our geographical location in the center of the country at the convergence of two Interstate highways (the north/south IH-35 and the east/west IH-10), and midway between North and South America, the Corridor has become a nationally-significant hub for international commerce – a fact highlighted by the signing of the North American Free Trade Act in San Antonio in 1994.

Today, 48% of the nation’s $900 billion in NAFTA trade either originates in or is destined for Texas – the vast majority of it traveling by truck up Interstate 35 through our region.  This river of trade fuels millions of Texas jobs, but it comes with a price: Interstate 35 in the Austin-San Antonio Corridor has been ranked as the 4th most congested Interstate in the US, and the 3rd most-congested spot for trucks anywhere on the US Interstate System.  According to the Texas Transportation Institute, this congestion is costing the Austin-San Antonio Corridor over $1 billion per year in lost time, wages, and fuel costs.

A study of Interstate 35 from Mexico to Canada (1700 miles across six states) by the Federal Highway Administration found that the highest vehicle counts, the worst congestion, the slowest average speed-per-mile, the lowest levels-of-service, the most accidents, and the most fatalities (more than 100 per year) all occurred along IH-35 in the Austin-San Antonio Corridor.

Freight rail traffic through the Corridor is impacted by the same pressures of population growth and increased NAFTA trade that confront Interstate 35. The Union Pacific Railroad line that parallels IH-35 from Laredo to Round Rock - built nearly 150 years ago - currently has 137 at-grade crossings in the Corridor, creating public safety issues (eight ‘serious’ accidents per year), traffic congestion at grade crossings, and the threat of hazardous materials moving through populated areas.

Growth in rail volumes and traffic is expected to also increase dramatically over the next several decades with expansion of the US and Mexican economies and as a doubling of capacity at the Panama Canal comes online in 2014.